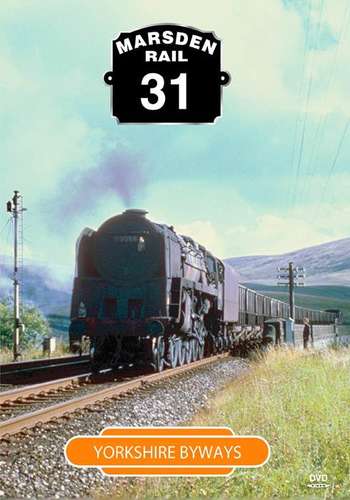 The programme starts in 1962 at Goole, with an ex-Lancashire & Yorkshire Railway 'Pug' at work in the docks and the town's engine shed still home to a large number of steam locomotives.

From Goole, the focus moves to Hull, where trolley buses still operated in the city's streets while rail services maintained links with the coastal resorts of Hornsea and Withernsea. Journeys on both of these routes are featured.

Moving north to Bridlington, a steam-hauled special working is joined for a journey to Filey, Whitby and Scarborough, where summer excursion traffic from Lancashire and the West Riding was still in the hands of steam traction.

From Scarborough, the enthusiasts' special used the coast line to Whitby and it was filmed at a variety of locations on this long-closed route.

Another long-closed route from Whitby is also featured - the 35 mile long line to Pickering and Malton.

In addition to scenes on the route as it crosses the North Yorkshire Moors, rare film shows a diesel shunter retrieving wagons at Pickering prior to closure of the line, together with the arrival of the Royal Train at Pickering after the station's closure!

Moving nearer to York, the Derwent Valley Light Railway is shown, together with views of the city centre and the busy East Coast Main Line.

In the city's streets, the numerous buses of the former West Yorkshire Road Car Company highlight the intense competition faced by British Railways to retain passengers on its network.

Views of the Clayton West, Holmfirth and Meltham branches are a reminder of the local network that was swept away in the 1960s.

Moving west to Halifax, the High Level branch from Holmfirth to Pellon and St. Paul's is shown, followed by scenes on the Queensbury route and the Worth Valley branch in pre-preservation days.

The final section includes a journey in 1962 on the line from Wilpshire to Hellifield and, at Hellifield, a variety of scenes reflect the intensity of traffic that used the junction.

Moving north on to the Settle and Carlisle route beyond Hellifield, impressive film shows double-headed Class 9Fs at work, sharing the route with Jubilees from Leeds Holbeck depot in their last years of service.