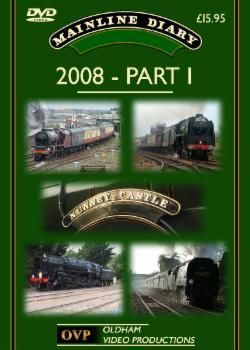 This video diary features a variety of mainline steam events from December 2007 to June 2008. Featuring plenty of high-speed action, artistic photography and beautiful surrounding scenes. We feature commentary in the appropriate places and an excellent range of locomotives which will make you want to watch this video over and over again.

Content Includes:
• 6024 'King Edward I' on the Welsh Marches & South Wales mainlines in lovely winter lighting conditions.
• 5029 'Nunney Castle' returning to the mainline, including scenes of prepping the loco for its loaded test run.
• 71000 ' Duke of Gloucester' on its 2nd run over the Devon Banks (stalling on Dainton Bank), plus the steam train to Milford Haven sine 1993. We also include 4 shots on the ill-fated 'Cornishman'
• 6201 'Princess Elizabeth', on the ill-fated Dartmouth Express
• 6233 'Duchess of Sutherland' & 60019 'Bittern' on the 'Locomotive Exchange Special'
• 60019 'Bittern' on the 'Severn Valley Phoenix, seen on Sapperton Bank
• 34067 'Tangmere' on a Cathedrals Express to Bristol, including a powerful climb to Upton Scudamore.
• 8F 48151 working solo along the Central Wales Line.
• 35028 'Clan Line' on the 'John Bellamy Memorial Special', and on the Orient Express trains to Westbury.
• 4936 'Kinlet Hall & 92203 'Black Prince' hauling 2,000 ton stone trains at the Foster Yeoman Open Day
• 4936 'Kinlet Hall' working solo along the Berks & Hants and Great Western Mainline.Oldham Video Productions