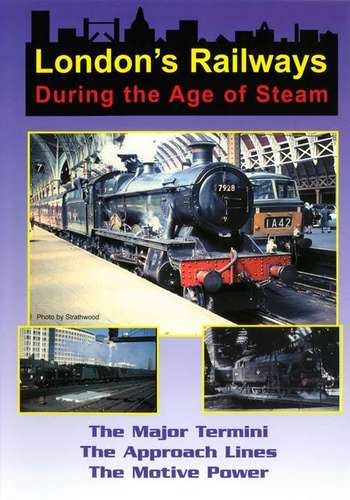 London was once a mecca for the steam enthusiast.

Within an area of just a few square miles motive power from all the regions could be seen in action.

A detailed look at Euston in the 1950s with rare colour scenes. 'Royal Scots', 'Duchesses' and commuter trains are featured in and around the terminus.

St Pancras - The Midlands Gateway to the North

Steam in action around St Pancras in the 1930s, 50s and 60s featuring 'Midland Compound', 'Royal Scots' and Jubilees'.

Film from the 1930s to the end of steam is used to outline the development and layout of a classic location. A4s are also included on some famous named trains.

Paddington - the Way to the West

Steam from the 1930s to the 1960s as well as the diesel era featuring the 'Blue Pullman and the short lived Hydraulics.