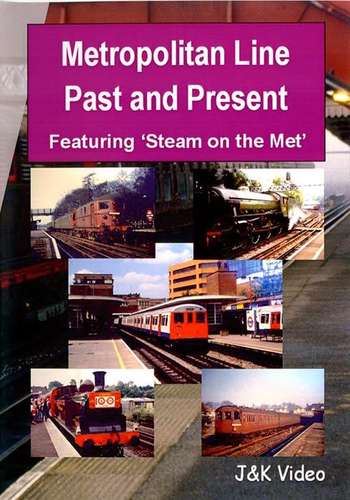 The title Metropolitan Line, was adopted by the newly-formed London Passenger Transport Board for the lines it inherited from the former Metropolitan Railway in 1933.

This DVD traces the history of today's line and includes a cab ride from Baker Street to Uxbridge, filmed in 1910, as well as film of steam on the Chesham Branch, including its centenary in 1989.

Steam on the Met became a regular feature during the 1990s, with a variety of visiting locomotives.

Most of these are featured, along with various tours headed by Metropolitan electric locomotive no. 12, 'Sarah Siddons'.

Also included are scenes of a preserved DMU Bubble Car and the C69 'Yellow Pages' unit, both on the Chesham Shuttle.

We see work on installing the new bridge over the A40 trunk road at Hillingdon, and refurbishment of the A Stock at Derby.

In part 2, we take a detailed look at today's Metropolitan Line, which operates at higher speeds than the other underground lines, with some non-stop services.

Starting at Aldgate, the line is covered through Baker Street, and out to Chesham and Amersham, and then onto the Uxbridge Branch.

Interesting aspects of the infrastructure and station architecture are seen.

The programme concludes with a look at some of the surviving rolling stock and relics of the Metropolitan Railway.