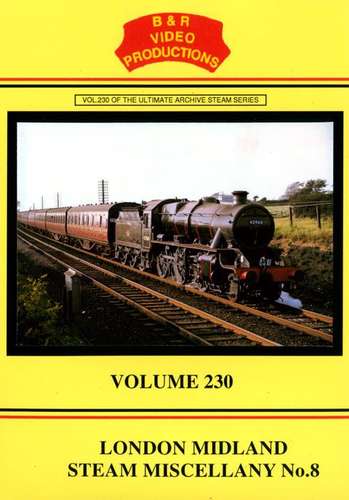 The eighth volume in our popular “Miscellany” series to cover London Midland steam compiled from mostly unseen footage from a variety of different cameramen and in the order the film runs off the original cine reels. Here we feature Midland 2Fs, the GCR in LMR days, in & around Manchester, the WCML and The North-West.

The line between Desford Junction and Leicester West Bridge had restricted clearances and was the last home of the diminutive Johnsons 2Fs which had been introduced as far back as the 1870s! We visit the line during February 1963 with snow still on the ground.

Next, in LMR days, we make a journey along the Great Central main line from Marylebone which includes Aylesbury, Brackley, Banbury, Woodford Halse, Rugby, Lutterworth, Leicester, Loughborough, Nottingham, Chesterfield and Hasland shed. We even feature a 1962 journey behind a 9F in normal passenger service from Brackley to Aylesbury!

On to the North-West and the Manchester area where a famous steam working in 1964 and 1965 was the evening commuter service from Manchester Central to Buxton. This working is forever associated with ‘Jubilee’ No. 45705 “Seahorse” and we cover the journey in some detail. Following on from this, there is excellent footage around New Mills Junction, Gowhole Yards, Chinley, the Romiley and Marple area, Hayfield, Stockport, Stockport Edgeley shed, plus Manchester Victoria and Exchange.

Shrewsbury and Ruabon are visited next and time is spent at Rossett (between Chester and Wrexham) and Talacre plus Worleston on the North Wales coastline.