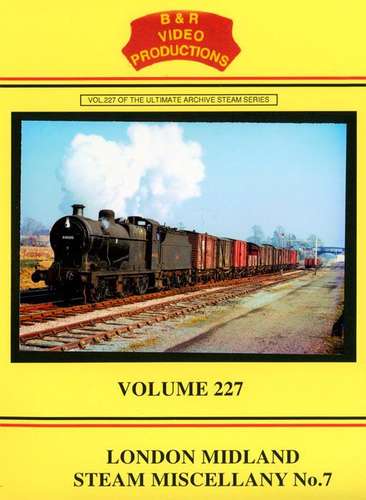 The seventh volume in our popular 'Miscellany' series to cover London Midland steam compiled from mostly unseen footage from a variety of different cameramen and in order the film runs off the original cine reels. This volume mostly features the North-West of England up to the Scottish border.

Our journey starts in Carlisle with extensive coverage of the area including Kingmoor and Upperby sheds as well as near the long-closed station at Floriston, close to the Scottish border.

Next, we travel south on the WCML to Shap Bank for a feast of steam action including scenes at Tebay and Oxenholme. We also cover Carnforth, Skipton, Barrow-in-Furness and Lancaster.

Then to the Fylde area, where in addition to a Clan pacific, we see the last working of a Royal Scot in the area, in 1965.

There is plenty of steam action around Preston including the town itself, Farringdon Junction, Leyland and Lostock Hall shed. Further locations also include the stations at Accrington, Wigan, Warrington, Crewe and the sheds at Edge Hill, Speke Junction, Crewe South and Bolton.

Finally, we travel away from the North-West to the East Midlands to visit the impressive station at Nottingham Victoria on the Great Central in 1964 along with East Leake, Mansfield, Penistone and Canklow shed, plus a 9F cab ride.