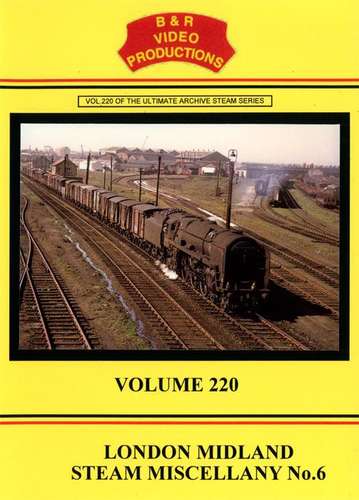 The sixth volume in our popular "Miscellany" series to cover London Midland steam compiled from mostly unseen footage and in the order the film runs off the original cine reels. Not only do we cover London Midland engines operating in their home region but also elsewhere.

In fact, we start with a few shots of them working on the Southern Region in 1965, before visiting the Gloucester and Bristol areas for a variety of steam action, including some rare footage of ex-MR dock tank No.41537 going about it's business, and then onto North Wales for scenes at Bangor, Menai Bridge and Bodfari.

Next we visit Rugby in January 1962 and amongst all the action, the unique Class 8 Pacific No.71000 "Duke of Gloucester" passes by. Two visits are then made to Staveley Ironworks to see the Victorian ex-MR 1F "half-cabs" at work followed by visits to Boroughbridge, Shap, Carlisle (including Canal Shed), Oxford, Hereford and Bletchley.

The "East Devon" rail tour is seen in 1965 on the Lyme Regis branch and near Exmouth, followed by the "Farewell to the Stratford-on-Avon and Midland Junction Railway" tour of April 1965, a few months later by the "Northamptonshire Branches" brake van tour with 2-6-0 No.78028. Other tours covered in 1965 are the Warwickshire Railway Society's "Midlander" plus the SLS's "Midland Locomotive Requiem".

Travelling south once again, we visit the S&DJR at Shepton Mallet, Evercreech Junction and Templecombe. Then to Stonehouse (Bristol Road), the Nailsworth branch and Coaley Junction plus the west bank of the Severn Estuary including AAylburton Bullo Pill, Lydney and Undy.

There is extensive coverage at Banbury with steam on passenger and freight workings including the short time when Britannias were allocated there. Super "D"s are seen in the West Midlands and other places such as Crewe, Wakefield, Wrexham, Chester and Birkenhead Woodside.

Finally we visit the North-West for steam action at locations such as Farrington Junction, Preston, Carnforth, Rose Grove, Bolton and Manchester.