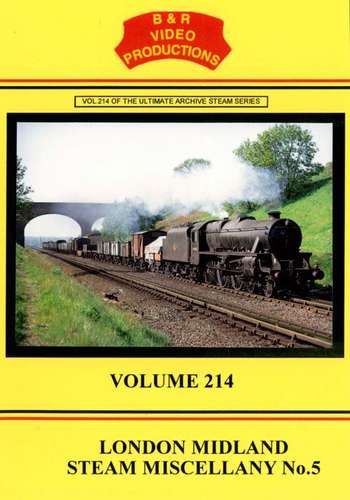 The fifth in our miscellany series covering London Midland steam is compiled from previously unseen high standard footage taken by the late Harry Ashby. A bit different to the norm, it features a high proportion of freight trains.

We begin on the line from Shrewsbury to Wolverhampton with coverage at Hollinswood Junction, Madeley Junction, Shifnal and in particular at Cosford. The latter was favourite haunt of Harry Ashby and much time is spent here watching the all-steam activity. It even includes footage of two passing V-bombers!

Next there are scenes along the old North Staffordshire line from Burton-on-Trent to Uttoxeter at Scropton and Tutbury while Aldridge is seen under a blanket of snow in February 1966.

Another well covered location is Elford Loop on the Midland route from Derby to Birmingham plus film taken near to Haselour water troughs. We watch a seemingly never ending stream of freight trains passing by at Wichnor Sidings and Wichnor Junction to the south of Burton-on-Trent.

Other locations visited include Lichfield Trent Valley, Lichfield City, Colwich and Winwick Junction to the north of Warrington on the WCML. There is excellent quality film of the Peak District including Buxton shed and yards, Great Rocks Junction and Peak Forest.

In 1967, Harry travelled on an SLS tour from Stockport over the Pennines and through Leeds to York behind Britannia No.70038 “Robin Hood” and also in 1965 on the WRS “Pennine” tour with plenty of coverage at Leeds and at Carlisle Kingmoor shed.

The archive film is entirely in colour An authentic sound track has been added along with a commentary to complement this further nostalgic look at the last years of London Midland steam.