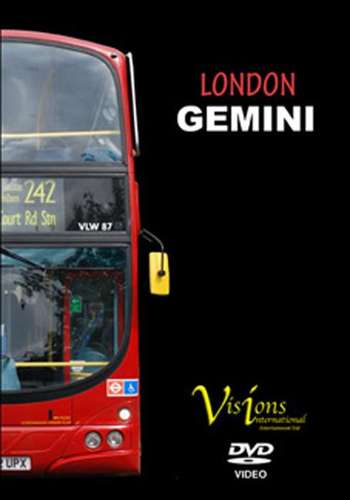 Following on from the acclaimed London Enviro DVD, London Gemini is the first of two programmes devoted to the Wrightbus double-decker in London. It focuses on the early Eclipse and Pulsar batches delivered between 2001 and 2006, all of which were built onto either the Volvo B7TL chassis or the DAF/VDL DB250. A later volume will deal with the Gemini 2 variants introduced from 2008, as well as the hybrid buses.

Some 850 units of the first model were delivered to Arriva, Go-Ahead, the one-time East Thames, First Group and Travel London (later Abellio), alongside a speculative batch for London United. Like other bus designs in the capital, many were ordered for specific contract renewals or type changes, but the earliest models have now begun the inevitable march to the provinces as their London life comes to an end.

Programme sections are devoted to each of the main operating companies, there’s a separate review of the ‘odds & ends’, and a comparison between the Volvo and DAF units powering the buses. Detailed graphics list each of the batches as delivered, company by company and garage by garage, with a summary of the current allocation.

All this is illustrated with high-quality widescreen footage from across the TfL area, featuring almost every route the ‘Mark One’ Geminis currently work, and there’s an informative script to explain the background . . . in short, pretty much all you need to know about the Wright company’s first foray into the double-deck market.

Written and Narrated by David Maxey.