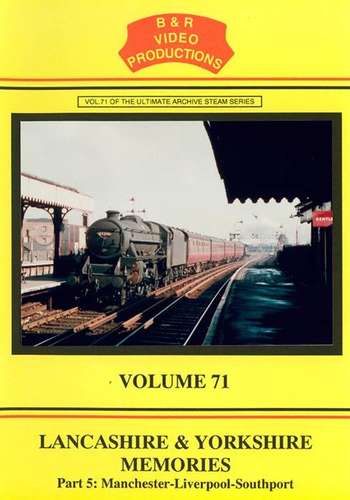 A DVD based solely in Lancashire, an area bounded by Manchester, Liverpool, Southport and Wigan.

Starting at Manchester Victoria we travel to Kearsley and then see unique footage of "LION' at Eccles on its original route of the Liverpool and Manchester Railway.

Next Patricroft and the coal fields of Walkden.

The push-pull service through Warrington, Widnes and Ditton Junction, Edge Hill yards and shed take us to Liverpool.

On to Southport to travel the line to Preston via Crossens, Hesketh bank and New Longton when there were still steam worked services.

Liverpool Exchange to Preston via Maghull, Ormskirk and Burscough Junction.

Return to Liverpool is via the Wigan to Kirby line.