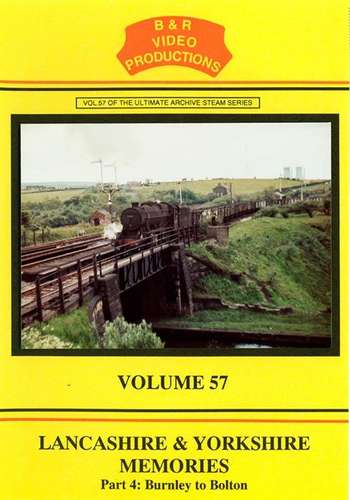 A fourth volume of our series on the lines of the Lancashire and Yorkshire Railway.

Firmly in Lancashire, this film will delight all that loved the scenes towards the end of steam in the North West.

It covers an area from Burnley to Blackburn and south to Bolton, Horwich and Chequerbent.

Mostly filmed in sunny bright weather by competent cameramen, we see Rose Grove at its best (or worst!) with duties over Copy Pit.

8F's struggle up the Padiham branch and run freely through Huncoat to Accrington.

South of Blackburn, we follow the now single line through Sough Tunnel to Entwhistle and Bolton.

An in depth look at the Chequerbent incline from the lineside, guards van and footplate, trains having to be split to just three wagons because of the severity of the climb.

Although the odd 2-6-4 tank and WD 2-8-0 appear, the most prolific engines were the Black 5's and 8F's but all are beautifully filmed, another fitting tribute to the end of steam in the North West and Lancashire in particular.