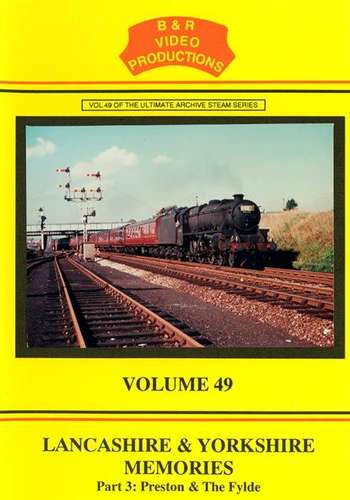 Another fascinating look at the railways using ex-L&Y lines. This video is firmly in Lancashire, Preston and the Fylde.

Preston was complex with L & Y and LNWR routes to its main station. Sadly the East Lancs side has now completely disappeared.

Using archive film from 1962 up to 1968 this video covers all routes to Preston, from the south and out to the north-west onto the Fylde and Blackpool.

It covers all the many junctions and types of traffic passing through, freight, coal, cement and of course the busy passenger traffic especially to Blackpool.

See Farrington yards, a birds eye view of Preston station, Lostock Hall shed and a glimpse of the Preston North shed after it had burnt down.

The Longridge branch was visited by a Super D in 1962, Preston Docks had steam up until 1968.

Specials pass through, we cannot show a Southern engine but there is an LNER A2 and a GWR Castle. Jubilees, Royal Scots and the occasional Duchess appear.

The two routes to Blackpool Central and North are covered, this time a Clan and an LNER A1 put in appearances alongside LMS and Standards.

Twelve cameramen filmed for this video including Eric Woods whose still material has been published in the "Glorious Years" features of Steam Railway magazine. His cine film was rare too and this video overs the glorious years of steam around Preston.