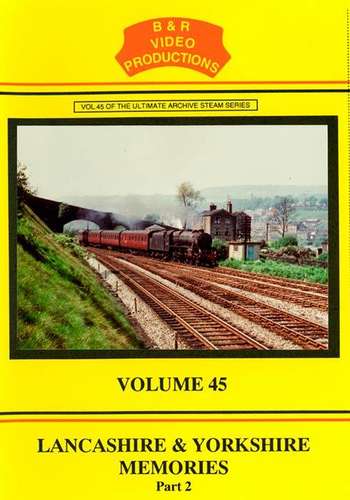 In this title we leave Yorkshire and head for Lancashire via the ex LNWR route from Heaton Lodge Junction, through Huddersfield and the climb to Stanedge.

This involves virtually all the types of traffic and locomotives to be seen from 1963 to 1967.

So summer extras (just look at the stock on some of the trains), coal trains westwards, empties returning, general freight, and oil tank trains feature with Jubilee, Black 5, Crab, 8F, 9F, WD and 2-6-4 Tanks as motive power on this six mile climb over the Pennines mainly on a 1-in-105 gradient.

As in Part 1, snow scenes are included, this time at Longwood.

Then it is down the other side of Stanedge through Diggle to Stalybridge.

Although not Lancashire or Yorkshire specifically, there is a look at the Woodhead Route over the Pennines with excellent footage at Guide Bridge including steam and electric traction running side by side.

To return to our route for Manchester we journey via Denton Junction to Miles Platting and are now on L & Y territory.

There follows a look at traffic through Newton Heath before a journey with Fowler 2-6-4 Tank 42343 over the L & Y railway lines of Middleton Junction, Rochdale, Whitworth branch, Royton and Oldham Werneth ending at Manchester Ducie Street Goods.

Finally a look at Manchester Victoria station which is our stepping off point for Part 3!