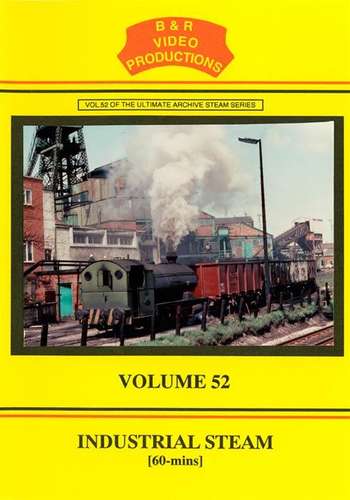 The popular misconception that Industrial railways were just yard shunts with small 0-4-0 tanks or the ubiquitous J94 type will be completely dispelled by this programme.

Some systems were enormous like Ashington, Philadelphia and Corby, often fully signalled as well.

There were ex BR steam engines to be found from all of the "big four" companies sold into industrial service.

There were narrow gauge systems as well at Bowaters, Kettering and in North Wales.

Engines wrestling with poor track abounded at cement works while ports such as Preston, Whitehaven and Falmouth were locations providing steam locomotives at work.

Par had one of the smallest and Baddesley Colliery had a Garratt at the other extreme.

The oldest engine in service could be found at Seaham, with Wirksworth a close second.

Even a sewage plant found use for steam.

Power stations had side tanks the power of a Black 5, the NCB probably had the biggest fleet of all.

These are not posed views of steam but engines working hard for their living in their true environment.

There are 100 engines from 25 builders in this story.

It was all part of the steam scene in Britain, if you saw them, here are the memories; if not see what you missed.