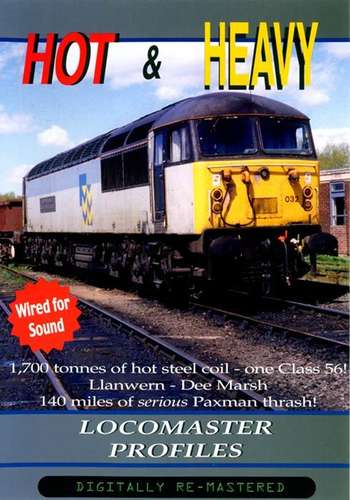 Take 1,700 tonnes of hot rolled steel, haul it over 140 miles of fierce gradients with a single Class 56, and you have all the ingredients for a train that is hot, heavy, long and LOUD!

Add some fine scenery and plenty of semaphore signals and you have the fascinating journey on board the 6M84 Llanwern-Dee Marsh steel train. It is also a journey of contrasting landscapes, from the lowlands of South Wales to the delightful countryside of the Welsh Marches.

This is a digitally re-mastered and extended version of the VHS title which was filmed in May 1996.

Traction for the train is provided by 56 032 which was specially Wired for Sound for the trip.

The journey starts at Margam TMD (which is packed full of 37s, 56s and 60s) from where we travel light engine to Llanwern steelworks to collect a consignment of hot rolled steel destined for British Steel's finishing plant at Shotton.

With a 1,700-tonne load in tow, 56 032 is soon into its stride as it 'wheelslips' on the wet rail as it passes East Usk Yard. At Maindee Junction we turn onto the Welsh Marches route to tackle the stiff climb to Pontypool Road.

From Abergavenny it's semaphores all the way as the 56 pounds its way up the notorious 1 in 82 Llanvihangel bank. With the loco on maximum power and in virtual meltdown, speed is down to little more than 20 miles an hour!

It's then downhill through Tram Inn and Pontrilas to Hereford. After that there's the 36 mile slog through Ludlow and Craven Arms to the summit at Little Stretton.

There are a couple of breathers though - first for a speed restriction at Leominster, then for a brief pathing stop in Wooferton Loop, and finally a signal check on the approach to Craven Arms. All of these require the 56 to be on full power to get the train on the move again.

After Little Stretton summit, the 56 descends through Dorrington to Shrewsbury from where departure marks the start of a taxing 15 mile climb to Weston Rhyn. That's followed by the crossings of the magnificent Chirk and Dee viaducts.

After descending to Wrexham, there's more serious thrash for 56 032 as it tackles the 9-mile 1 in 83 climb through Penyffordd to Buckley, before dropping down to the banks of the River Dee at Shotton.

At Hawarden Bridge, we turn into Dee Marsh Yard; journey's end for our 56 and its Hot & Heavy load. 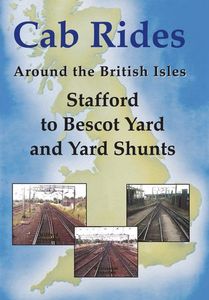