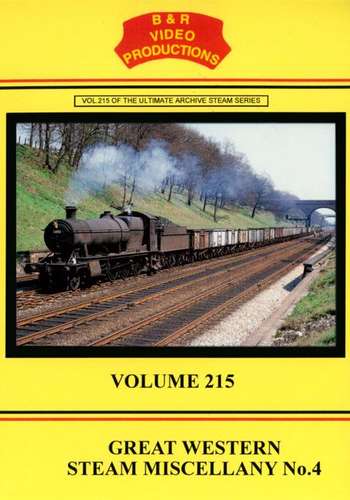 We begin at Bromsgrove and the Lickey Incline. Although the tracks here were London Midland Region, in later years the Western Region exerted a considerable influence, especially with the bankers, and this extended along the main line and branches to places such as Ashchurch, Bredon, and Tewkesbury.

Along the route from Wellington to Wolverhampton we see Hollinswood Junction, Madeley Junction and Cosford, plus Wolverhampton Low Level and Birmingham Snow Hill.

There is film at Bristol Temple Meads and a visit to St. Philips Marsh shed. Gloucester has excellent coverage including Horton Road shed, the Golden Valley auto-trains, Standish Junction, Stonehouse, Grange Court Junction, Woolaston and Aylburton. We watch the all-steam activity at Hereford and before visiting Banbury. At Worcester we start a journey up the Severn Valley to Bewdley and the colliery sidings at Alveley.

Oxford is another location seen in detail including film at Wolvercote and Kennington, locals for the Princes Risborough branch, plus visits to Eynsham and Fairford. There is film at Reading, West Drayton, Iver, and Paddington. Welsh coverage includes Carmarthen, Bronwydd Arms, Llandilo, Pontardulais and Aberystwyth.

In the South-West visits are made to Shepton Mallet, Washford, Montacute, Tavistock, Brent, Saltash and Wadebridge.

The archive film is mostly in colour An authentic sound track has been added along with a commentary to complement this further nostalgic look at the last years of Great Western steam.