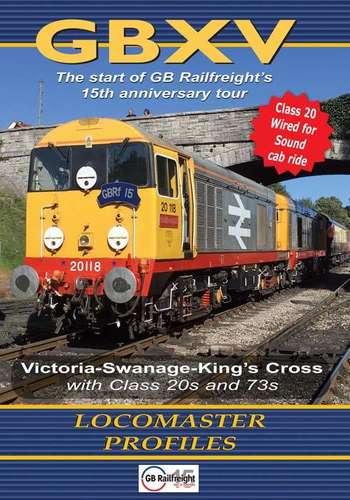 GB Railfreight’s ‘GBRf 15’ charity train in September 2016 will almost certainly be the railtour of the decade. The 2,220 mile four-day tour featured an astonishing 19 locomotives and raised £125,000 for charity. This cab ride DVD covers the first day of the tour – and what a day it was. The 365-mile trip started at London Victoria with Railfreight-liveried 20118+20132 setting off for Fratton in Hampshire. 73128+73213 then worked the train forward to Swanage before the two Class 20s headed back to London via Poole, Southampton, Salisbury, Westbury and Reading. With plenty of sunlit landscapes, a fascinating route and some serious thrash, it made for the ultimate Class 20 WIRED FOR SOUND cab ride.

The complex route out of London is via Herne Hill, Tulse Hill, Streatham and Tooting to Wimbledon. At Raynes Park, the 20s head to Epsom and continue through the equally unfamiliar locations of Leatherhead and Dorking. They then blast their way across the North Downs to Horsham where they join the Mid-Sussex route through Pulborough to Arundel Junction. From there, the journey continues along the West Coastway route through Barnham and Chichester to Fratton. Our cameras and microphones had a break while lineside footage shows 73128+73213 working the train forward to Swanage. We re-join the Class 20s in the Dorset seaside town and head over the Swanage Railway and through the Purbeck Hills past Corfe Castle to re-join the Weymouth to Bournemouth main line at Worgret Junction. After Poole comes the day’s biggest challenge as the two Class 20s - with load 11 and two dead 73s on the back of the train - tackle the notorious 1 in 60 Parkstone bank. After passing through Bournemouth there’s a scenic run through the New Forest to the fascinating Southampton suburbs. From Eastleigh the wall-to-wall sunshine eventually works against the camera so we skip that section and resume the cab-ride from a standing start at Salisbury. There’s a lively run to Wilton Junction where the train takes the delightful Wylye Valley route through Bapton and Warminster to the freight hub of Westbury. The 20s are on full power again as they tackle yet more rare ‘Chopper’ track - the Berks & Hants route. The sun eventually sets eighteen miles later at Woodborough Loop. After a delightful lineside shot of the train at Newbury, we see the nocturnal arrival at Reading from the cab. The programme ends with the day’s most extraordinary track scratch – the view from the cab of 73213 as it emerges from Gasworks tunnel into King’s Cross station!

This is without doubt one of the best cab rides we have ever filmed. In fact it was so good that we couldn’t pick the best leg of the day - hence the programme is nearly three-and-a-half hours long!