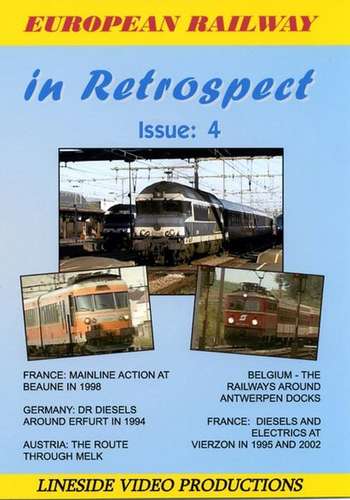 France – Beaune is situated on the main line south of Dijon. We study rail traffic in August 1998 & see a wide variety of traction which has now been withdrawn, including a Gas-turbine powered T2000 turbo unit, a Z7100 four-car electric multiple unit dating from 1961, a CC7100, a BB8100 & CC6500 electric locos, as well as CC72000 diesels now also withdrawn.

Germany – we look at former DR traction at work in 1994 in & around Erfurt & northwards on the line to Nordhausen. Class 232 locomotives dominate as well as a Class 216 & a Class 228 diesel. Class 202s are seen in action on branchline services north of the city before we make our way north to Nordhausen, where we observe Class 143 electrics in their original liveries & a Class 216 diesel departing on a westbound stopping train.

Austria – a study of the main line through Melk on the Westbahn route out of Vienna. Filmed in 1998 we find plenty of freight & passenger activity featuring now withdrawn locomotive Classes. We see 1042s, 1044s & 1142s on passenger as well as Class 1010 electrics on freight & lorry-carrying trains. German traction is also seen in the shape of Class 140 electrics on freight & a Class 103 on passenger. Many of the rolling stock & their liveries are now too, just part of history.

Belgium – The port of Antwerpen is visited in 1995 where we study yet more long-withdrawn locomotive Classes at work. We feature Class 20, 22, 23, & 26 electrics in & around the docks on freight as well as Class 85 & Class 51 diesels – the latter on trains of bananas for Germany. The mainline to the east of the docks is visited where a variety of EMUs are seen as well as a Class 11 on passenger.