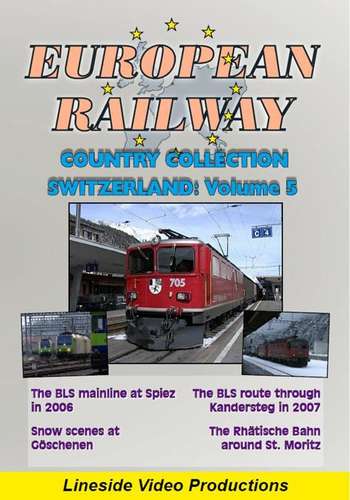 This programme features some material which was used in European Railway: Issue 25 and Special Edition programmes 2007 and 2008. Other material contained in this programme is new and not previously published.

Spiez - This busy location forms the junction with lines between Bern and Brig and between Bern and Interlaken, including the branch to Zweisimmen. July 2006 was a period of great transition for the BLS railway with new and older traction to be seen in action - this we see in the form of Class Re 420 and Re 425 and new Class 185 and Re 485. SBB traction is also seen with Class 460 locomotives on passenger services; we also see a class 470 ‘Cisalpino’ train-set on its way to Basel.

St.Moritz, Samedan and Preda – are all situated on the Rhätische Bahn network to the south of Chur. Our visit was made in early March 2007 and sees a variety of motive power at work, some of which is now consigned to the history books. At St. Moritz we witness Class Abe 4/4 and Abe 4/4? railcars, class Tmf 2/2 diesel shunter, Class Ge 4/4? and Ge 4/4?? all at work. At the junction town of Samedan we witness Classes Ge 6/6, Ge 4/4??, Ge 4/4? on passenger and freight train action, including freight-train shunting with the Ge 6/6. Our final destination in this section is the mountain station at Preda on the northern side of the Albula tunnel. Here passenger and freight services are seen with further examples of Ge 6/6, Ge 4/4? and Ge 4/4?? all in action: it includes scenes of the special toboggan trains carrying passengers up from Bergün.

Kandersteg - filmed in March 2007 before the new Lötschberg Base Tunnel was opened, this section looks at BLS traffic on the old classic mainline. A wide variety of motive power is seen including classes, 185, 485, 465, 460, Re 620, Re 420, Re 436, Re 425, diesel railcar class 642 and shunter Eea 935. Intercity passenger, intermodal and mixed freight trains as well as car-shuttle trains are all filmed at work.