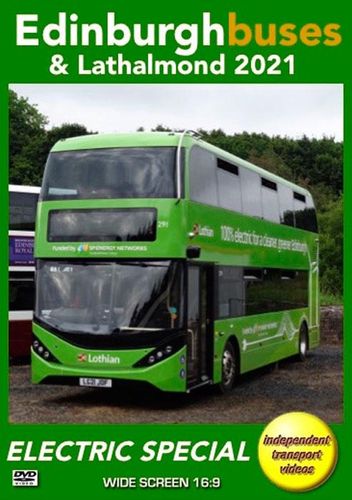 We welcome you to this rather ‘special’ update to our series of DVD programmes that feature the buses of Edinburgh and our visits to the superb Scottish Vintage Bus Museum at Lathalmond in Fife. We have given the title a strap line of ‘Electric Special’ as it features the batch of four battery-electric powered BYD D8UR-DD double-deckers with Alexander Enviro400City EV bodywork painted in the striking green livery of their sponsor – SP Energy Networks - the company funding the project.

Our 2021 visit to the Scottish capital begins at Shandwick Place on a very wet Edinburgh day! Locations covered in this programme include Lothian Road, Princess Street, Western Harbour, Elm Row, Leith Street, York Place, North and South St David Street and concluding at Haymarket. Since our last visit the Lothian Buses fleet have been receiving a batch of 78 Volvo B5TL/ADL Enviro400MMC-bodied double-deckers along with 30 Volvo B8RLE/MCV ‘eVoRa’ 49-seat single-deckers some of which are seen in this programme. You will also see some of the massive 13.4 metre ADL Enviro400XLB double-deckers in an overall white livery. These formally wore the ‘Airlink’ livery but have been made surplus to requirements on that route as air travel has been considerably reduced due to the ongoing global pandemic. Other operators recorded in action are Stagecoach with both their service buses and inter-urban coaches carrying their dedicated liveries that are slowly being replaced by the deep yellow and gold ‘long distance’ livery. Also filmed are Firstbus with their buses branded with ‘Royal Route’ or ‘West Lothian’. Look out for the Ember coach. This is an electric Yutong TCe12 coach in a grey livery branded for their Edinburgh to Dundee express service.

During our filming in the city centre we take a ride on 294 (LG21 JDK), one of the BYD/Enviro 400CityEV double-deckers on route 10 from Princess Street to the terminus at Western Harbour and return to Elm Row in the city. The silent running of these vehicles is interrupted by the sound of rain and road spray on this rather inclement day in Edinburgh! From Edinburgh we travel to the lovely small town of Haddington in East Lothian to record the buses from Lothian Buses’ ‘EastCoastbuses’ fleet as well as independents Prentice of Haddington and Eve Coaches of Dunbar. At Dunbar we see an Eve Coaches Optare Solo in action. In the second part of this programme we attend the 2021 Open Weekend at the Scottish Vintage Bus Museum at Lathalmond. We begin our visit with a look at Lothian Buses’ electric double-decker 291 (LG21 JDF), which is one of the batch of four that we travelled on in Edinburgh. This time we take a ride on it on the Internal Service around this superb museum’s site seeing many of the exhibits as we pass them. In complete contrast we take a trip to nearby Dunfermline onboard W. Alexander and Sons (Fife) RO607 (AWG 393), the 1948 Cravens-bodied Guy Arab III and return on Edinburgh Corporation 314 (JWS 595), a 1943 former London Transport Guy Arab II now with a 1953 Duple/Nudd body. All the action and exhibits are recorded for your enjoyment at this excellent museum. Here's to the future and the past!