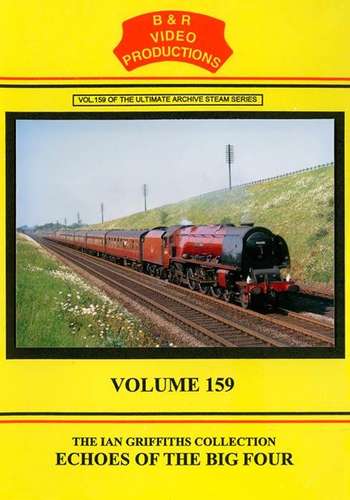 An archive film from the collection of Ian Griffiths portraying scenes of British Railways in the last ten years of steam from 1958 to 1968. Our film covers every region with many types of locomotives that existed during this period. We include some rare types ranging from small tank engines to express engines which are not usually seen on archive videos produced today.

We feature the London termini including Kings Cross, Euston and Waterloo. Many locomotive sheds are visited from East Anglia, South Wales, Nine Elms and Scotland. Rail tours are seen over the Waverley Route and from Paddington to North Wales. On the Southern Region we visit Guildfrod in 1964 and the Isle of Wight in 1965. On the Midland Region we visit Wellingborough, Leeds and Bescot. The Western Region is visited at Oxford and Dan y Graig, the Eastern Region at York, Retford and Cambridge. There are even some scenes on the Bedford to Hitchin line showing the making of the film "Those Magnificent Men In Their Flying Machines".

Finally, after the end of steam we see some views of LT pannier tanks at Neasden, preserved steam on the main lines in the 1980s and a visit to Dai Woodhams scrap yard at Barry. Overall a 90-minute memory of how it really was once.

This all colour film has excellent detail and locations. It has been mastered with an authentic sound track and has an extensively researched, detailed and informative commentary.