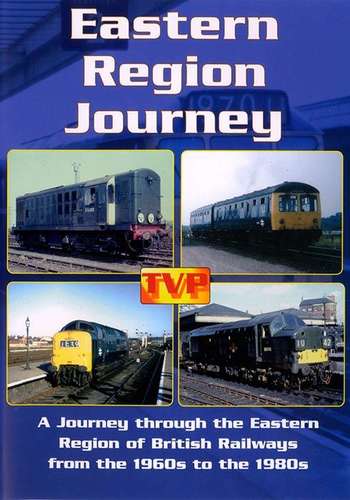 In the late 1960s, 1970s and 1980s the Eastern Region of British Railways was characterised by a number of branch and secondary lines which had changed little since the days of working steam.

In this programme we explore the network, travelling from the suburbs of London to Norfolk from where we head across country to Lincoln.

On the way we'll explore the motive power and stations from a bygone era of railway travel.

East London in the 1960s including the branch from Romford to Upminster and the Palace Gates branch just before closure in 1963 with a Class 31 hauled service.

Stations on the North London line.

Broad Street before closure and Liverpool Street Station in the years before modernisation.

The Buntingford Branch and main line to Cambridge in the 1960s with freight and passenger workings.

Norwich Station in 1979 and the freight only branch to Lenwade.

The major junction station at March and Whitemoor Yard together with a range of traffic in the 1970s and 1980s including the 'Deltic Fenman' railtour, Class 25s, 31s, 20s and 47s.

Peterborough with main line traffic in the pre-electric era. Includes Deltics together with Class 47s, Class 25s and Class 31s.

Spalding with loco hauled trains, freight and diesel units in the station and its approach lines in the 1970s and 1980s.

Sleaford with diesel multiple units in and around the station.

The closed station at Firsby.