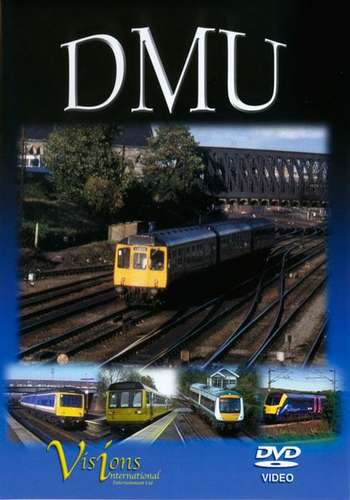 DMU is Visions’ review of the British diesel unit - from the prototype ‘lightweights’ of the mid-1950s to the latest German-built Desiro and everything in between. Forty different classes appear in the programme, as well as numerous sub-classes at locations all over Britain.

An Introduction takes a brief look at the Derby & Metro-Cammell lightweights to set the scene.

The Blue Era feature the many First Generation types at work in the 1980s.

The Sector Years follows the survivors as they’re redeployed in a variety of new colour schemes.

A New Generation follows the introduction of the ‘bus type’ Pacers, closely followed by the much more successful Sprinter family.

Class 101 Finale is a bonus feature to highlight the extraordinary longevity of the early MetCam design.

The DMU Privatised is a striking contrast between new and old as private operators take over the fleet and (surprise, surprise) apply yet more colourful liveries.

Coming Up to Date is a round-up of recent DMU developments, with the likes of Turbostars, Coradias, Adelantes & Desiros working alongside the ‘second generation’.

Whether your interest lies in the early, middle or recent period of DMU development, you will find plenty to grab your attention and set your nostalgic senses racing. In short, if you like DMUs, you will love this programme!