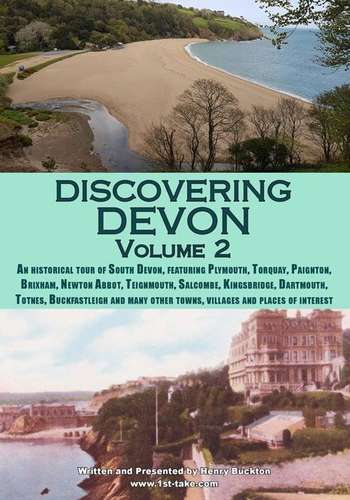 South Devon is without question one of Britain’s prettiest corners, with its rolling hills and stunning beaches. Here you will find the English Riviera and the South Hams, an area of outstanding natural beauty. In this brand new film presenter Henry Buckton takes us to coast, countryside, towns and villages, and reveals local industries, history and culture.

Our tour begins in the pretty seaside town of Teignmouth, which was the second biggest port in Devon in the fourteenth century, and continues to Kingsteignton, on the eastern edge of the Bovey Basin, which is rich with fine quality ball clays; Newton Abbot, once two separate settlements astride the River Lemon; and the magnificent Buckfast Abbey, which celebrates its 1,000th anniversary this year.

We begin our tribute to the English Riviera at the grand Victorian resort of Torquay, with its strong connections to Agatha Christie; moving on to Paignton, which was also transformed in the 19th century; before making an evocative visit to Brixham, which was once the biggest fishing port in the entire country. Other highlights include the stunning town of Totnes, with its fine Norman castle, and the enchanting coastal resorts of Dartmouth, Kingsbridge and Salcombe.

You will then enjoy a grand finale in the city of Plymouth, one of our most important maritime bases, which has a proud and fascinating heritage.

Enhanced by superb modern film, rare archive images and interviews with a host of contributors, this historic journey around South Devon is one to truly savour!