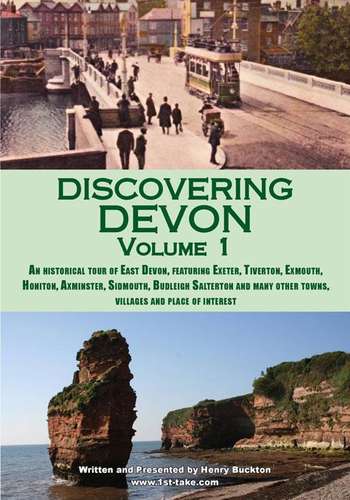 Devon is one of England’s largest and most beautiful counties and in this film, the first in a series of four, we will be taking a tour around its eastern region. Presenter Henry Buckton takes you on a tour around some of the traditional industries that have flourished here and examines the important part that canals, railways and tourism have played in developing the area, as well as the ever present influence of the sea.

The film begins in the historic town of Tiverton, blessed by the convergence of two rivers, the Exe and the Lowman, which made it an ideal site for occupation from the very earliest of times. A little further south is the beautiful village of Bickleigh, with its stunning mill, and then you will see Wolford Chapel, a little piece of Devon which is owned by the people of Canada. Honiton, nestling in a pretty valley near the River Otter, is famous for its lace-making, and has had royal endorsement since the time of Queen Victoria, while Axminster, site of a medieval abbey, has been renowned for producing carpets of the finest quality for over 200 years. The River Axe was an important trade route from very early times and the attractive harbour at Axmouth was the gateway into an ancient land inhabited by several Iron Age tribes. Across the river is the town of Seaton, now famous for its superb tramway which runs on the track bed of an old railway branch line.

Other highlights include visits to the majestic coastal village of Beer, once a major producer of stone; Ottery St Mary, where the burning of tar barrels still persists on Guy Fawkes night; the picturesque resorts of Sidmouth and Exmouth, which both began life as small fishing villages; the impressive sea stacks at Ladram Bay; genteel Budleigh Salterton; and a feature on Topsham, once one of the busiest ports in England. Our itinerary concludes at Devon’s capital, Exeter, originally a Roman settlement and now a dynamic, bustling city adorned by a wonderful cathedral, one of the most awesome medieval buildings in Europe. Enhanced by beautiful modern film, rare archive images and enlightening interviews with a wide variety of contributors, this historic journey around East Devon is truly unmissable.