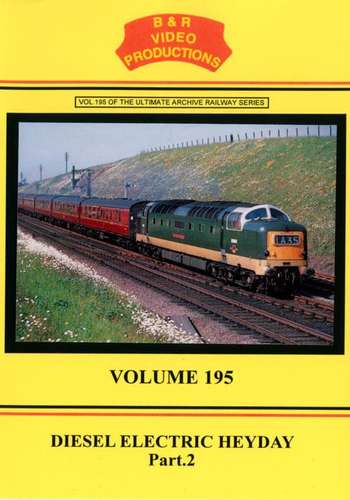 This is the second volume in a series featuring diesel-electric locomotives of British Rail. Here we feature the higher end of the power range dealing with Types 3, 4 and 5 as well as HSTS.

Spread over a number of years we see many types in their original green liveries as well as their later Corporate Blue. Other features include a Class 45 working with a brake tender, a couple of shots of the ill-fated DP2 plus an extraordinary scene on Shap where following an EE Type 4 failure a steam banker is used behind which is another EE Type 4 complete with its own train!

A number of special workings also feature such as the "Deltic Fenman" and the "Deltic Devonian". We also see the 1977 introduced "Jubilee" at Chelmsford with a pristine 47 164 complete with a Union Jack emblazoned on its sides. Several Pullman trains are seen including the "Tyne-Tees Pullman", "Yorkshire Pullman" and "Queen of Scots". We enjoy scenes of 47s, 50s and HST along the sea wall at Dawlish as well as the comings and goings at York with numerous Deltics in action.

There are some brief shots of the HST prototype at Shildon; now the subject of "Project Miller". We do not ignore freight and many different types of goods traffic are seen from early mixed consists. Speedlink, tanks, stone and Merry-go-Round trains, the latter in the hands of both Class 47s and 56s.

All in colour throughout except for the Kestrel film. An authentic soundtrack has been added along with an extensively researched commentary.