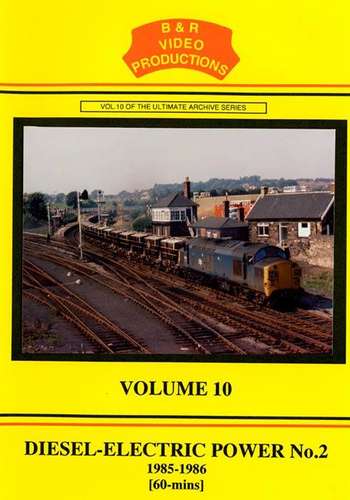 A sequel to Volume 9 which concentrates on the modern image of BR motive power. Most classes active on BR in 1985 - 1986 are featured, including a glimpse of the then new class 59 on proving trials piloted by 56047 on the spectacular Foster-Yeoman stone trains.

We start with scenes at Wakefield Kirkgate, a mainly freight location at the centre of a number of lines and during weekdays enjoys a wealth of traffic.

D200 is viewed at a number of locations on special runs including the 'Tamar-Tyne Special' and the 'Penzance Flyer' in 1985.

On the WCML, Acton Bridge (north of Crewe) sees considerable activity on a weekday morning including 27066.

Our next location is Severn Tunnel Junction with wintry conditions. A 56 waits with oil tanks for a London-bound HST as 25259 struggles gamely with a huge freight.

At Chinley North Junction, unusual views of 31s and 20s as well as 45s and double-headed 37s as the trains negotiate the crossings on to the triangle or speed through to Manchester.

We see a couple more double-headers at Chapel-en-le-Frith before moving to the dilapidated remains of Chinley Station where among others, 40057 powers through.

Finally 40009/44 manoeuvring light engine in the yard at Warrington.