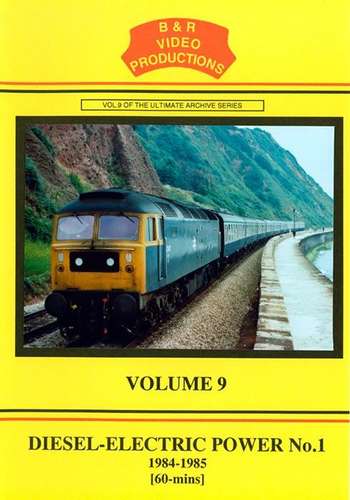 Since 1955 modernisation has eliminated steam locomotives from the system, prototype diesel and electric locomotives have come and gone, as have most of the first generation of diesels.

A few survive and today's image although still changing has developed into a pattern which is illustrated by this DVD filmed during 1984 and 1985.

The Westbury to Warminster line is the scene for the heavy Foster-Yeoman stone trains with Class 56s pulling and banking on occasions.

Toton and Worksop are hubs of freight operation and provide spectacular ballast and coal trains for dispersal throughout the Midlands. Class 31, 37, 47, 56 and 58 provide the power.

We move to Carlisle which sports a wide variety of diesel and electric power including APT, 26, 27 and 81 classes.

A surprisingly busy part of the network with many cross-country workings is the West Country.

At Retford and Worksop, more M.G.R. and coal traffic workings are seen at this extremely heavy worked location with 56s, 58s and 20s.

Finally Exminster and Truro are visited with passenger workings along this ex-GWR line.