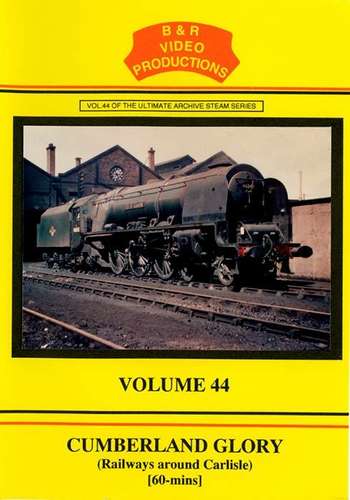 Cumberland Glory is the story of the railways around Cumberland's border city of Carlisle.

Citadel station witnessed the passing of many trains, among them the "Royal Scot", "Mid-day Scot" and "Waverley".

Railtours brought in locomotives from all the big four companies as well as Scottish preserved engines such as "Glen Douglas" and Caley Single No.123.

Kingmoor Shed is visited portraying normal working locomotives and the visitors from railtours.

Its turntable played host to a Western A2 Pacific "Blue Peter" during the period covered in this video which begins in 1962.

Branches and main lines radiating from Carlisle are visited, including Silloth and Langholm.

There is magnificent action from the Settle and Carlisle line and the West Coast main line over Shap.

The transition to diesel traction prior to eventual electrification in 1974 is seen with locomotives such as Class 40s and 50s plus the Royal Train.

From heavy freight to 46238 "City of Carlisle" cleaned for football special, from an immaculate "Glen Douglas" to a 9F struggling to Ais Gill, it is all in this story.

Much of the film, in both black and white and colour, was shot by local enthusiast Brian Irwin.