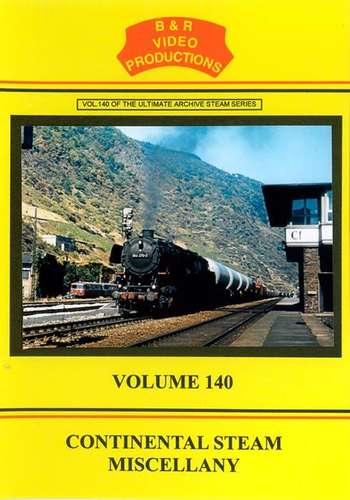 Steam in Western Europe in normal service outlasted that on British Railways by some years. This DVD gives a flavour of what could be seen in use in six countries over the English Channel: France, Spain, Portugal, Italy, Austria and West Germany.

The locomotives were different, being in a number of cases larger than British ones. Wheel arrangements were sometimes not what had been seen in Britain. Eight coupled varieties were also often common.

The loading gauges were often more generous and on the Iberian Peninsula the track gauge was wider. Even so, the countries did use narrow gauge quite widely.

Types of locomotive which Britain only experimented with could be seen, such as Franco-Crosti, Giesel-fitted and oil-fired engines.

Some locomotives were British built and these could be seen working into the 1970's by those enthusiasts who ventured abroad to see or film them.

Many of these locomotives can be seen in this programme, from the smaller narrow gauge types to Pacifics, Heavy Freight engines, Beyer-Garratts and twelve coupled tank engines.

Often spectacular scenery was encountered and winters with snow were guaranteed.