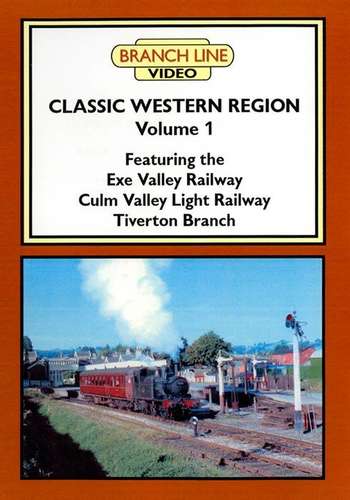 Among Britain's railways the Western Region had a distinctive style and image inherited from its predecessor, the Great Western Railway. In this programme we look at a classic group of branch lines centred on Tiverton in Devon, the Exe Valley Railway, Culm Valley Light Railway and Tiverton Branch.

The Exe Valley Railway from Exeter St. Davids to Dulverton with its push-pull Autotrains was a typical Western branch linking local stations and village halts with main line services at Exeter.

Using archive cine film to retrace a journey along the line, we capture the atmosphere and character of this much-loved rural byway. Highlights include scenes at Tiverton, Bampton and Dulverton, the latter showing connecting services with the Taunton to Barnstaple line in steam days.

From Tiverton, the "Tivvy Bumper" as it was known to locals, is filmed on its four and a half mile branch from the main line at Tiverton Junction.

Propelled by regular 14XX Class locomotive, the single coach autotrain is seen at Tiverton and Halberton Halt, the only intermediate stop on the line.

At Tiverton Junction, we travel to Hemyock on the Culm Valley Light Railway, seven and a half miles long, meandering through glorious Devon countryside at 15mph.

Scenes of the train crew dismounting to open and shut the crossing gates on the line capture its idyllic charm. Mixed traffic was a regular feature on the branch with milk tankers to and from the dairy at Hemyock.

The programme features over 40 minutes of archive cine film, together with a survey of the principal features at each station.

Other highlights include film of "The Westcountryman" rail tour of the lines in 1963 with scenes of the train en-route to and from Exeter, hauled by "Mallard" starkly contrasted with grain hoppers being shunted at Thorverton Mills sidings by tractor power!

Finally a "Then and Now" sequence shows what remains of the railway today, including many historical items on view at Tiverton's Museum of Mid-Devon Life.

Together with reminiscences of railway folk who worked the lines, plus an informative commentary, this film recreates a truly evocative image of the Western at work on some of Devon's most scenic branch lines.