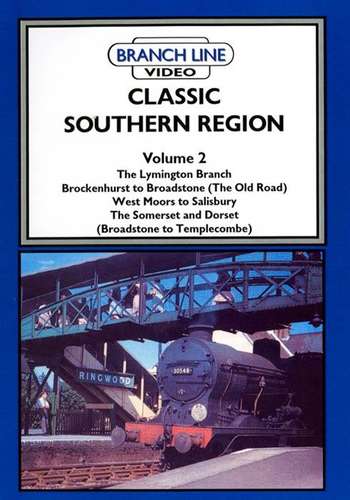 The counties of Hampshire and Dorset have a rich railway history and in Classic Southern Region, Volume 2 we chart the rise and fall of four classic lines:

Section 1 looks at the Brockenhurst to Lymington branch.

A brief history of the branch is followed by over eight minutes of cine film, including scenes of M7s working the push pull services in the early 1960s, through to the final days of steam working with B.R. Standards when the branch became famous as the last steam-worked branch line in the country.

Section 2 follows "The Old Road" from Brockenhurst through Ringwood and Wimborne to Broadstone.

Again a brief history is followed by seven minutes of superb archive cine film showing each of the stations and the rich diversity of traffic that used the line before its closure to passenger traffic in 1964.

Section 3 looks at the line from West Moors to Salisbury.

This little-known line followed the River Avon for most of its route passing through pretty stations at Verwood, Daggons Road, Fordingbridge, Breamore and Downton.

Filmed in 1964 the last days of the line are captured before we take a look at Salisbury and its amazing variety of traffic.

Section 4 takes a look at the southern end of the Somerset & Dorset from Broadstone to Templecombe.

Over 18 minutes of archive cine film show each of the stations and halts on the line.

The milk traffic at Bailey Gate is shown in detail and sets the tone as most of the traffic seen on the Somerset & Dorset comprises of goods trains.

In all there are over 40 minutes of colour archive cine film, which is brought to life by a full commentary and the reminiscences of loco crews who worked the line.