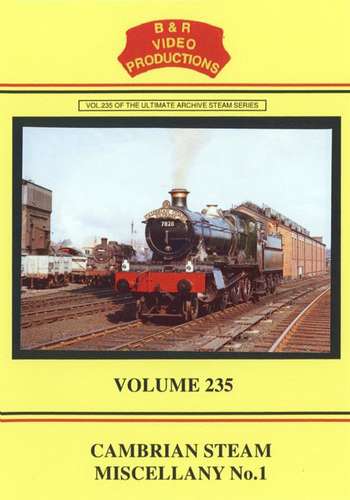 The first volume in our popular "Miscellany" series to cover the Cambrian Coast routes and compiled from mostly previously unseen footage from the B & R archives.

Travelling along the coastal route we visit places such as Pwllheli, Penychain, Afon Wen, Criccieth, Portmadoc, Minffordd, Penrhydeudraeth and Harlech. Then back at Barmouth we see up bay platform, opened by the GWR in 1923, and the Old Chapel Viaduct which was rebuilt in the early 1950s. All followed by glorious views of the world famous Barmouth Viaduct across the Mawddach Estuary.

Continuing south we pass Morfa Mawddach, Fairbourne, Friog Rocks, Llwyngwril and stop of at Towyn for a few minutes before heading up the Dovey Estuary.

We then spend some time at Aberystwyth, with 'Manors' everywhere, before heading back inland through Bow Street, after a token exchange to Borth, Ynyslas, Glandyfi and Dovey Junction. This famous isolated junction has no road access and we make a number of visits including seeing the Pwllheli and Aberstwyth portions of the up 'Cambrian Coast Express' being combined together for the onward journey to Shrewsbury.

Machynlleth is well covered and highlights include scenes at the shed showing the preparation of 82033 for duty plus 'Dukedog' 9017 acting as pilot on both the up and down "Cambrian Coast Express* in 1960. There are overhead views here plusplus panoramas across the valley.

We continue inland via Cemmes Road with its token exchange before extended coverage of the final stages of the ascent of Talerddig Bank with passenger and freight trains battling their way up the grade. The final up "Cambrian Coast Express* is seen here in March 1967.

Other locations featured include Newtown, Welshpool, Buttington, Llanymynech, Llanfyllin and Oswestry. Although not specifically Cambrian there is also film of Shrewsbury, Hookagate, Llangollen, Llandderfel, Bala Junction, Bala, Bontnewydd and Dolgellau (including on what is believed to be the last day of services).

Most of the film is in colour and has been assembled in the order the film runs off the original cine reels. An authentic sound track has been added along with an informative commentary to compliment this nostalgic look at these last years of steam on the Cambrian.