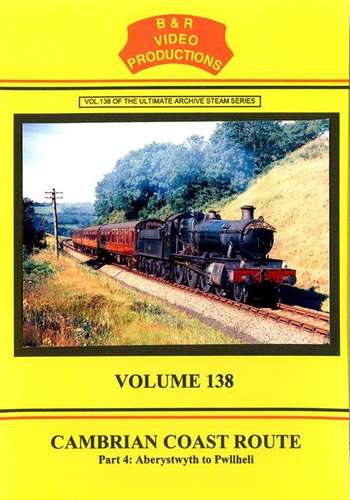 A DVD covering the last section of the route of the Cambrian Coast Express from Aberystwyth to Pwllheli and what could be seen in the area from the 1950s to the 1980s.

We cover four narrow gauge railways: the Vale of Rheidol, the Talyllyn, the Welsh Highland (1964) and the Ffestiniog, and two miniature railways, the Fairbourne and Butlins, Pwllheli.

We even cover the Aberystwyth Cliff Railway!

The picture is completed by the reopening of Barmouth Bridge in 1986 and English Electric Class 37s.

There is much truly archive material used in this production recapturing a bygone era of this popular Cardigan Bay coastal area.

The lines still survive today so compare the scenes of that era shown here with modern day or witness the efforts made by the preservationists to recreate it.

There is an extensively researched commentary with an authentic sound track.