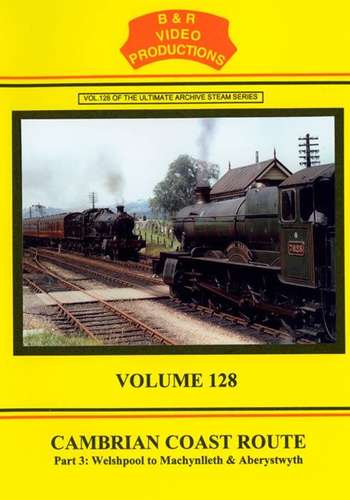 This third volume in the series covering the Cambrian Coast Express Route from London to Aberystwyth and Pwhelli, takes a look at the line west of Shrewsbury through the hills of Mid-Wales over Talerddig summit.

Using archive steam material from the 1960s with occasional diesel footage such as the first ever visit of an HST working in 1983, Welshpool is reached.

Here there is extensive coverage of the Welshpool and Llanfair line in its pre-1956 working days with freight.

Onwards over Talerddig with Manors and Standards and a few views of the return to steam tours.

Machynlleth is seen also in great detail and variety with film sometimes from the 1950s; ex-Western motive power including Dukedogs and eventually their Standard class replacements up to 1967.

The Aberystwyth line through Glyndfi and Borth is followed by some scenes on the Vale of Rheidol when it had its own terminus station.

Filmed in colour except for the earliest material, this video takes a fascinating and nostalgic look back at the steam scene of the 1960s.

The film has an authentic sound-track and has been researched in detail to give an informative commentary.