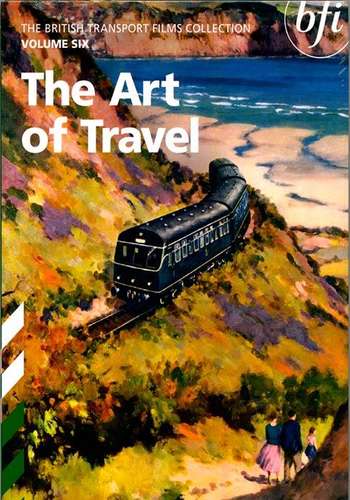 
Following the nationalisation of transport in 1948, the British Transport Commission set up its own in-house film production unit. Launched May 1st 1949 and led for 25 years by Edgar Anstey - a founding father of the British documentary movement - it became one of the largest industrial film units in Britain. All these films are now preserved in the BFI National Archive.

This selection has been digitally remastered for this two-disc set, which is a must for any transport enthusiast, but also for the documentary aficionado who will recognise traits and innovations in British non-fiction filmmaking.

Films included are as follows:

North to the Dales (1962, Colour, 19 minutes)
The Yorkshire Dales - 'from which no traveller wishes to return'. Sheltering under the Pennines, the Dales have escaped the human ravages of time. There is magic here; skysweeping hillsides and weirdly weathered rocks; Wensleydale cheese; ruined abbeys and castles and standing drystone walls; fellracing and potholing, photography, traditional songs and a commentary spoken by Robert Shaw. 16mm & 35mm

Yorkshire Sands (1955, Colour, 15 minutes)
Light verse and gay music make their own comment on the holidaymakers of the Yorkshire coastline. Between Tees and Humber thousands each year enjoy the sea and the sands, the funfair and the ballroom: for a row or romance, there's something for each! 16mm & 35mm

Down to Sussex (1965, Colour, 17 minutes)
Sussex - A country rich in scenic beauty and history. South Down and Weald - open space and green woodland. This is Sussex, a county rich in scenic beauty, seaside resorts and international events; peaceful downland villages and fertile weald. History shows itself everywhere, right back to the threshold of legend - The Long Man of Wilmington and Chanctonbury Ring. All this the traveller can see and enjoy, together with the present-day delights of, for example, the Petworth Show, Goodwood Races, polo at Cowdray Park, Glyndebourne, and the fun of the Sussex coast.

The Land of Robert Burns (1956, Colour, 21 minutes)
This short, evocative account of the poet's life is set among contemporary scenes of the people of south-west Scotland as they grow from children to manhood. A representative selection of his songs takes on fresh significance when heard against a background of the people and the countryside he knew and loved. The film's score is by Cedric Thorpe Davie, and the songs are sung by the Saltire Singers. It was directed by Stewart McAllister. 16mm & 35mm

Journey into History (1952, Colour, 10 minutes)
In the cities of Britain we can travel in time as well as space. This film chooses the England of Hogarth, Gainsborough, Robert Adam and Captain Cook. As the camera moves across outstanding monuments of their work and relics of their achievements from Syon House to Greenwich, members of the Old Vic Company speak appropriate passages from the literature of the mid-eighteenth century. The musical score was specially composed by the late Sir Arnold Bax. 16mm & 35mm

The Travolators (1961, Colour, 8 minutes)
Approximately 40,000 people use the Waterloo & City Underground line every day. For years they had walked to and from the platforms at the Bank by a steep passage known as the 'Drain'. But know, they can ride up and down on the first moving pavements in Europe - the Travolators. This film shows the construction of the Travolators which was achieved without disrupting normal traffic. 16mm & 35mm

Journey to the Sea (1952, 17 minutes)
This is the story of a lorry's solitary journey with a new propeller for a trawler laid up in a port on the rugged sea-coast of Wales. For the lorry-driver and his mate it is all in a day's work; minor mishaps are overcome on the journey from Preston through the beautiful Welsh countryside. The story ends with the trawler on its way to sea. 16mm & 35mm

London for a Day (1962, Colour, 14.5 minutes)
Impressions of a great city from daybreak to dusk. A roving camera and smooth theme music say more than words. London's traditional sights - Buckingham Palace, Trafalgar Square, the Royal Parks, the Zoo, etc., await their visitors in the early morning. While a young motor-cyclist hurries by, to work on the pleasure boat he conducts along the Thames; a Beefeater goes on duty at the Tower; and the visitors hurry into London by bus and coach. The film conjures up the mood of a variety of London scenes and events throughout the day until a sightseeing-bus tour gives the visitor a last chance to catch up by night on anything he may have missed during the day. 16mm & 35mm

The Beacons and Beyond (1979, Colour, 28 minutes)
South Wales is an area of great natural beauty - from the Brecon Beacons in the north of the area to the rugged coastline of Pembrokeshire in the south. It is a land of attractive market towns and ancient castles, of hill and forest landscapes. This film covers many aspects of life in a region whose abundant attractions for the holidaymaker are made readily accessible by rail and road. 16mm & V.C.

A Desperate Case (1958, 10 minutes)
A cautionary tale of a typical holiday suitcase. Crammed beyond its capacity, imperfectly fastened, inadequately and confusedly labelled, the railways transport it from station to station, seeking its true abode. Finally, one of its owners comes to the nightmare tribunal where those who maltreat their luggage are dealt with. Did it happen? Was it a dream? Be warned. See this film. Avoid making yours 'a desperate case'. 16mm & 35mm

Lancashire Coast (1957, Colour, 18 minutes)
A coasts of contrasts - yet each aspect offering something to the holidaymakers arriving by train or coach. You may choose the gaeity and excitement of the national Beauty Contest finals held annually at Morecambe, or you may prefer the world's largest flower show at Southport. You can walk on the lovely quiet coast of the Lake District at Grange-over-Sands or claim a seat on the roller-coaster at Blackpool. You can fish, go sand-yachting at St. Annes, play golf or watch the wild fowl on the lonely Pilling Marshes. 16mm & 35mm

Golfers in a Scottish Landscape (1971, Colour, 21.5 minutes)
Two visitors enjoying Scotland, an enthusiastic but inexperienced golfer improving on the world's greatest courses; his wife exploring spectacular places visited by the first known lady golfer in history - Mary, Queen of Scots. The commentary of Scot's actor Andrew Crawford links romantic past with sporting present in a film which captures the flavour of the country and its national game. This film won the Gold Camera Award at the 1973 US Industrial Film Festival, Chicago, USA. 16mm