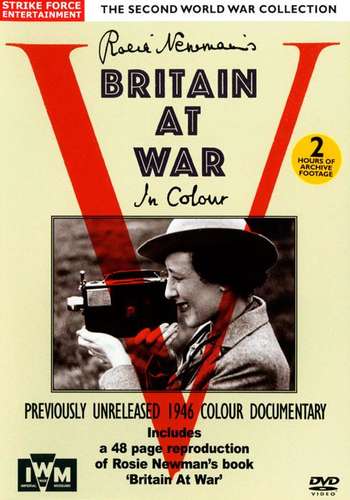 Sorry, this title is no longer available.

This previously unreleased and digitally restored 1946 colour documentary is one of the crown jewels of the Imperial War Museum's Film Archive. Shot during the Second World War and edited by the enigmatic socialite Rosie Newman with her then unprecedented civilian access to the training exercises of the armed forces and her unrivalled footage of aspects of life on Britain's home front, 'Britain At War' offers a unique and personal insight into the conflict in stunning colour.

This DVD release offers a choice of two audio soundtracks. The first is a musical-soundtrack using the same pieces of music that Rosie Newman herself played on a pair of gramophones during her own showings of the films. The second is a commentary by Jane Fish, Senior Curator at the Imperial War Museum Film And Video Archive. Jane Fish is also interviewed in a DVD Bonus Feature where she explains who Rosie Newman was and why she made 'Britain At War'.

This edition includes a reproduction of Rosie Newman's 1948 self-published book 'Britain At War' which provides an overview of the wartime subject matter she filmed.