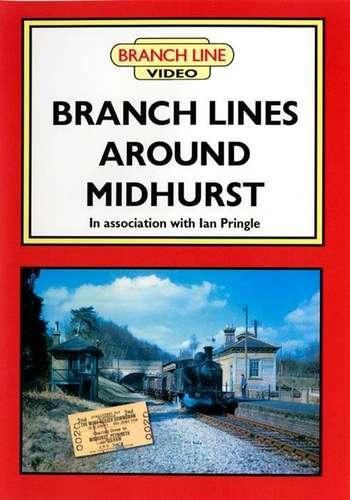 In the latter half of the 19th century the town of Midhurst in Sussex became one of the lesser known frontier posts between the London and South Western Railway and the London Brighton and South Coast Railway.

It was the focal point for three separate branch lines, none of which served the town particularly well, since they failed to offer Midhurst the one route it clearly needed - namely a direct link to the capital.

By this quirk of fate, Midhurst found itself to be the quintessential place where not to be on the emerging railway map of Britain.

While this predicament brought about an early demise for the railway at Midhurst, the three branch lines each had an individual character, which is explored and examined in detail.

Although passenger services were withdrawn between Chichester and Midhurst as early as 1935 - and from Pulborough to Petersfield via Midhurst in 1955 - the film has a wealth of excellent black and white archive cine film from the Southern Railway era and early 1950s, depicting the steam operated push and pull rail motor services on the two surviving passenger lines.

Goods trains continued from Pulborough to Midhurst into the 1960s and these are also shown in detail.

Colour cine film shows a brake van ride behind steam and includes scenes of shunting at Midhurst, Petworth and Selham.

Also included is a trip working to the aggregate terminal at Lavant on the truncated Chichester line, as well as scenes showing a number of special excursion trains run to Midhurst after passenger services had ceased.

A brief history, station survey and "then and now" sequence is complemented by the reminiscences of former railway folk whose fond memories bring colour and charm to life on the Midhurst branches.

Together, this definitive study provides a fascinating insight into a railway backwater that suffered from having the "wrong kind of connections!"