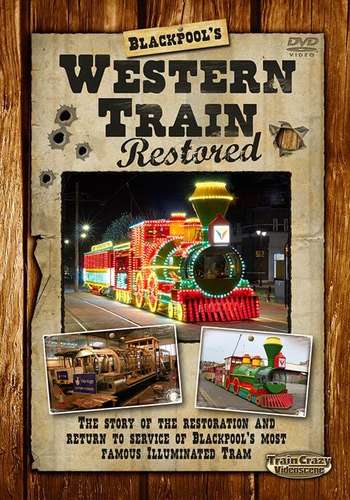 This is the story of how, after ten years out of service and a two year restoration job, this majestic creature rose from the ashes back to the promenade.

Jointly financed by the Heritage Lottery Fund and Blackpool Transport, once again Blackpool and it's visitors can enjoy the sights and sounds of this wonderful tramcar as it glides through the Illuminations. Smoke even comes out of the chimney!

With full access granted and produced in co-operation with Blackpool Transport this is the story of how a derelict wreck was stripped to a shell and rebuilt piece by piece.

The story of this Blackpool icon begins in the 1960s and with regular appearances each autumn through to the 1990s the tram is established as a firm favourite.

Then it's 1999 and its final year in service. Withdrawn due to its condition, the scrapman was looming and the end was near. Hidden at the back of the depot, the tram was dragged in two halves to Fleetwood for the Tram Sunday event in 2003. This was its last public appearance. Again the trams lay rotting away in the depot.

In October 2006 it was announced that Blackpool Transport had been successful in securing a £278,000 grant from the Heritage Lottery Fund. The train was coming back!

Work began in April 2007 and the trams were stripped to a shell. Over the next two years the painful job of restoring these trams was recorded in detail. From new timbers and framework, to rewiring, panelling and painting.

See the trams as they move from workshop to workshop and then the testing begins. Coupled up, the trams go 'live' for the first time; the first test run on the prom; the first private hire and the official launch in May 2009.

TRAMS magazine hired the train for a special night journey to Fleetwood in June 2009. See the trams as no-one has ever seen them before, at Cleveleys, Broadwater, Ash Street and Lord Street in Fleetwood at 3am!

Finally, the story is completed... back on the prom and running through the Illuminations, just as they were built to, 50 years earlier!

This is the story of a Blackpool icon. From zero to hero in two years, the Western Train has been restored and this is the full story of how it was done.