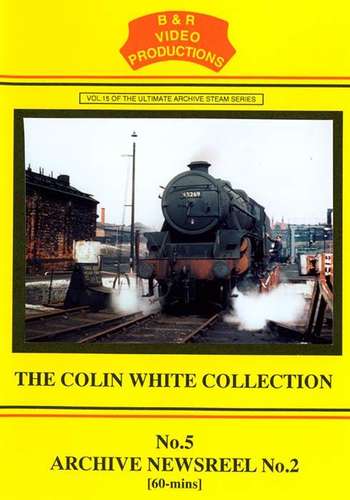 The second in this series offers a further multitude of fascinating subjects in nine sections.

Others are seen around Warrington and the Lune Gorge.

The Marlow Donkey was famous in Great Western history and was re-lived in 1973 using 1450, 6106 and 6998 on the branch from Maidenhead to Marlow via Bourne End.

When main line steam on BR came to an end in 1968, many farewell specials were run and we next include two of them, the Lancastrian No.2 Railtour and an SLS tour from Stockport to Carnforth using Britannia 70013 and Black Fives 45156 and 44949.

Narrow gauge working is depicted by scenes on the Bowaters Paper Mills in Kent before closure.

The scenes contrast the locomotives working days with the pleasure they now give to passengers at Whipsnade.

There is a tribute to steam power out of Waterloo in 1967.

The steam shed visited on the volume is Stockport Edgeley showing Stanier Class 5's and 8F's in their natural environment, the motive power depot and the men who worked on them while they were turned and coaled.

The continental section shows Pacific power with action from France and Germany which lasted some years after the end of steam in the UK.

Both preserved continental pacifics at Carnforth are seen in action in 1976 and the French Pacific at the head of the Golden Arrow leaving Calais Maritime.

WD 2-10-0 'Gordon' is shown over the last 25 years from its rare appearance on the Southern Region in 1966 through its days at Longmoor to its visit to Shildon and preservation on the Severn Valley Railway.

We conclude with industrial steam at Shilbottle Colliery in Northumberland where 0-6-0 tanks worked hard on the three mile branch of the NCB in 1969.

Again another good mix of steam traction in full variety from the humble colliery tank to the great expresses of yesteryear.