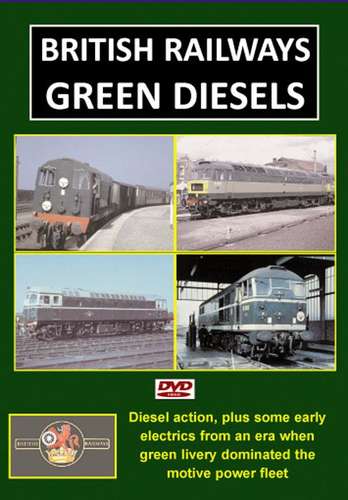 A look at diesel and electric power in action throughout the network in the 1960s when green livery dominated. We also feature electric power in light blue at Crewe plus the unique red livery on the Western Regions diesel hydraulics.

Diesel Hydraulics. ‘Warships’ and ‘Westerns’ on the Western Region in the steam era at Taunton and Shrewsbury along with Hymeks;

Metrovick Co-Bos and a view of this rarely photographed class at Peak Forest.

BR Sulzer Type 2s at Chinley and York on passenger and freight.

English Electric Type 4s at York Shed and station alongside East Coast Pacifics and on the East Coast main line to Darlington plus Trans-Pennine services.

Peaks at York and along the East Coast Main Line plus Tran-Pennine services in and around Chinley.

Deltics on the North Eastern Region in their early liveries at York and along the racing stretch of the East Coast Main Line.

Diesel Multiple Units with many types in action in Yorkshire and Tran Pennine routes with many in their early liveries.

Shunters with views in and around Doncaster

All Change at Crewe with electrics in their early years working alongside diesel and steam traction.