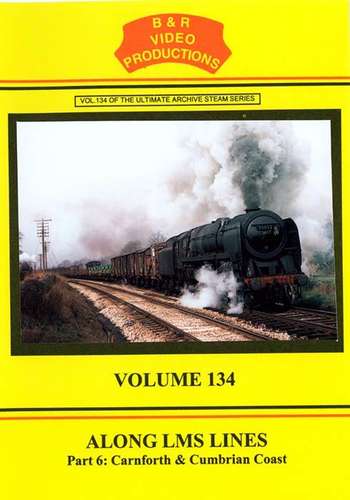 A further look at the West Coast Main Line in our series of DVDs that covers in detail the route from London Euston northwards to Carlisle and Glasgow.

Carnforth is our centre point before moving out along the Cumbrian Coast to Whitehaven and returning back to Carnforth for another brief encounter with the steam scene around the station and its motive power depot in 1967 and 1968.

Then northwards to Oxenholme and the last steam freight on the Windermere branch in 1968.

Climbing to Grayrigg for a tantalising glimpse of Tebay and Shap incline that will form the core of our next volume in the series, Part 7.

Mostly filmed from 1966 to 1968, this DVD shows mainly Black 5s, 8Fs and Standards but is well filmed nevertheless.

There are also some 'Return To Steam' tours to Grange-over-Sands which are supplemented with a few minutes spent watching LNWR No. 790 'Hardwicke' returning to the Cumbrian Coast in 1976 and very rare footage of the last steam hauled TPO from Whitehaven in 1985. Yes, 1985!

Excellent memories of lines and views now completely changed since 1968.

This film has been mastered for the best reproduction, complete with detailed commentary and authentic soundtrack.