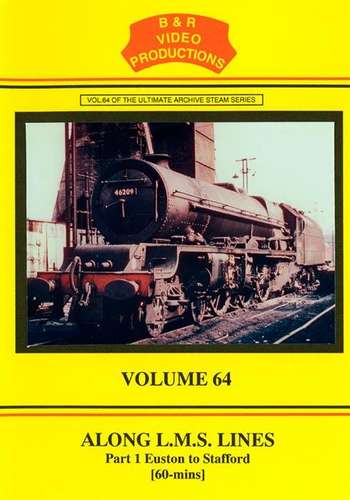 Following on from our successful Lancashire & Yorkshire volumes we now look at the London & North Western lines.

We will cover the West Coast Main Line and some of its branches and secondary routes from Euston to Glasgow.

This first volume looks at the scenes of the 1960's from Euston to Stafford via Northampton, Rugby and the West Midlands.

With fifteen Duchess pacifics, four Princess Royals, Scots, Jubilees, Super D's and Patriots, mixing it with Crabs, Jinties and Black 5's, we have it all in this video.

More steam power at Roade and an in-depth look at Northampton with even a GWR interloper here!

The highlight of the video has to be Rugby before and after the wires went up.

Four Princess Royals pass the camera, Duchesses galore, Jubilee, Scot, Standards and even a 2P 4-4-0. There are sights of green liveried Class 40's and a WD.

Into the West Midlands with Super D and 8F at Saltley and Bescot.

There is a Scot and a Duchess at Wolverhampton High Level; the trolleybuses were still here and an industrial Garratt works a colliery.