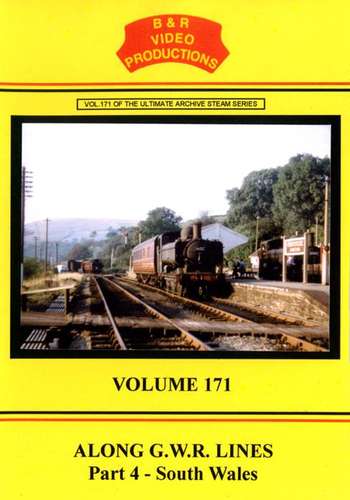 In this fourth part of our series, we mainly cover the railways in South Wales and mostly in the days of steam between 1960 and 1965. We feature many of the 0-6-2T and 8-coupled types famous for their use in this part of Wales.

After a few brief scenes in 1960 at Towyn on the Cambrian, we visit the South Wales main line at Pilning for views of double-headed coal trains. Then to Cardiff for 0-6-2Ts, 2-8-0s, Prairies & Pannier tanks and even an 8F interloper from Toton! There is extensive footage of a 1964 SLS 'Farewell to Brecon' tour, first with 0-6-2T 6606 via Abercynon and Quakers Yard to Merthyr, then onwards to Pontsticill and Brecon with pannier 3690 plus newly preserved 2-6-2T 4555. We return via Dowlais.

A brief fast-forward to 1977 and the last Western diesel hydraulics on railtours to Treherbert, Aberdare, Merthyr & Pontypridd.

Back in the 1960s, we visit the NCB collieries at Maerdy, Merthyr Vale and Mountain Ash to see ex-GWR pannier tanks including now preserved 9600 and 7754. But at Cashmores, the scrapman is busy…

We return to Cardiff for more 2-8-0Ts, Castles and 9Fs before travelling along the South Wales main line to Ebbw Jct. There are busy scenes at Newport and on the main line before reaching Severn Tunnel Junction. Further along we pass the Severn Road Bridge under construction and arrive at Gloucester, for scenes there in 1962 and 1964.

The Vale of Neath line ran from Pontypool Road. We see a lot of activity around Pontypool and visit Hafodyrynys mine for its Hunslet 0-6-0STs. Crossing the 200ft high Crumlin Viaduct, there are spectacular views of the valley below. The demolition of the viaduct is witnessed in 1967. Then to Hengoed, Treharris, Quaker’s Yard and Mountain Ash Colliery (for its saddle tanks), before arriving at Neath.

We visit Duffryn Yard depot on our way to Swansea, where in 1965 we join the last steam hauled special to Fishguard and Milford Haven with 6859 'Yiewsley Grange'. Plus some footage of the Tenby branch in 1960 with Prairies and Panniers. We conclude Part 4 with B&W and colour scenes at Cardiff Canton shed just before closure.