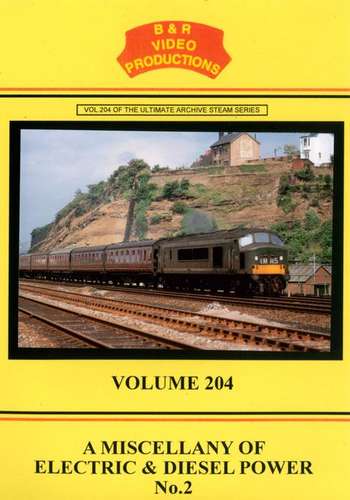 After the success of our previous miscellany of electric and diesel power (as well as the earlier Diesel Hydraulic and Diesel Electric Heyday series) we have delved further into our archives and compiled a second miscellany of film clips that were not included in those earlier volumes. There is a whole variety of scenes across all of the UK mainland, most of which have never been seen before and were taken during the 1960s and 1970s, with a few later scenes from the 1980s.

We start our journey with scenes at Bangor in North Wales, Shap (with steam bankers!), Carlisle, Beattock and Carnforth. We visit the Settle & Carlisle and then the London Midland Region around Birmingham and the Lickey Incline, again with steam bankers! The Shrewsbury area is well covered with a number of workings.

We travel south to the Southern at Hither Green, Clapham and Waterloo, then to the western at Paddington for a number of Western Class special charter trains, to celebrate the passing of those popular diesel hydraulics. There are a number of scenes around Bristol before we visit the Marlow and Bourne End branches.

Back to Scotland for scenes at Fort William, the Mallaig Extension and the Far North line at Georgemas Junction, Thurso and Golspie. Other scenes take in Elgin, the Strathspey line, the Forth Bridge area and Edinburgh Waverley.

Returning south, we visit the Woodhead route with its unique electric locomotives before taking a look at the reopening of Barmouth Bridge in 1986. Then once more to the Southern in 1972 for a journey on the Brighton Belle.

Down in the West Country we explore some of the long forgotten branches and have scenes around Truro, Par, Penzance, Plymouth and Newton Abbot as well as heading up to Ilfracombe. There are indeed many other scenes too numerous to list here.

Virtually all classes of British Railways diesels are seen from Deltics and Warships to diminutive shunters. Electric power includes the EM1s on the Woodhead and those early Southern Bo-Bo electrics. We see DMU and EMU action as well as a number of shots of those infamous 4-wheel rail buses of the 1960s. The prototype HST is seen at Bristol as well as some early liveried HSTs.

All the archive film used is in colour and an informative commentary along with an authentic soundtrack has been added.