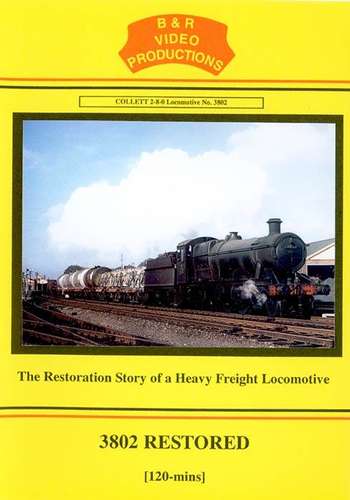 The restoration story of a heavy freight locomotive.

Locomotive 3802 was one of a fleet of 167 heavy freight 2-8-0s which served the Great Western Railway and the Western Region of British Railways for nearly 60 years.

This is the story of one of them, 3802, a Collett variation of Churchward's original 1903 version.

It follows the engine's history in preservation from its purchase from Woodham's scrap yard in Barry in 1984.

She was taken to the Plym Valley Railway and then Bodmin for initial restoration to steaming condition that had last happened in 1965 after a life of 27 years.

She moved to the Llangollen Railway in April 2002 for completion of her rebuild and all boiler work. This was achieved at the end of 2005 and she went back to work.

The film shows the restoration in detail at Bodmin and Llangollen and portrays the work needed to restore 70 tons of engine and 40 tons of tender.

The trial steamings at Llangollen are seen and her eventual entry into traffic there.