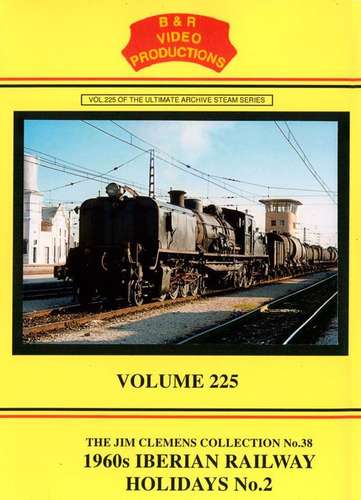 With steam declining rapidly in the UK, Jim Clemens had decided that summer family holidays should be taken in Iberia chasing steam! Here in our second installment, we continue his story of the rail scene in Spain and Portugal between 1966 and 1969.

The summer of 1966 found the family on the Costa Blanca in Spain. The ESA narrow gauge system is seen along the coast through Benidorm to Gandia. In Alicante, a visit is made to the broad gauge engine shed and we spend some time at the now closed Benalua terminus including the through service from Cartaghena and Murcia to Valencia. A trip inland was also made to La Encina and Jativa.

In 1967 and 1968 Northern Portugal was the destination. Visits were made to the mixed gauge line at Regua in the Douro Valley. The broad gauge station pilot here was a Beyer-Peacock 0-6-0 dating from 1875 whilst on the metre gauge we see our first glimpse of the asymmetric 2-4-6-0 compound Mallet tank engines.

In Oporto, as well as watching the city’s tram and trolleybus systems, there is a visit to the narrow gauge terminus at Trindade to see 0-4-4-0 compound Mallets at work and a visit to the newly built (1965) broad gauge engine shed at Contumil.

Next, we visit the narrow gauge system south of Douro at Sernada do Vouga, Oliveira de Azemeis and Espinho. Services are seen operating on the gauntleted track (narrow gauge set inside broad gauge) at Lousado and Famalicao with the branch onwards to Povoa de Varzim being particularly well covered. Other locations include Braga, Nine, Viana do Catelo, Valenca and Moncao.

In 1969 the base was Tarragona. By this time all the 2-8-2+2-8-2 Garratts had been concentrated here and we watch them at work on freight trains to Reus and Lerida. We also visit the Garratts home depot at Tarragona South, the refuelling point at Tarragona North shed and Lerida shed. More steam is seen at Mora La Neuva plus a glimpse of the 4000hp Spanish version of the BR “Warship” diesel, the RENFE Class 340.

Filmed in colour, a commentary plus soundtrack complement this look at the railways of lberia between 1966 and 1969.